3D
Scan The World
15,959 views 2,628 downloads
8 collections
Community Prints Add your picture
Be the first to share a picture of this printed object
0 comments

Nataraja (Tamil:"நடராசர்" or Kooththan"கூத்தன்:), The Lord (or King) of Dance), is a depiction of the Hindu God Shiva as the cosmic dancer who performs his divine dance to destroy a weary universe and make preparations for the god Brahma to start the process of creation.

The dance of Shiva in Tillai, the traditional name for Chidambaram, forms the motif for all the depictions of Shiva as Nataraja. He is also known as "Sabesan" which splits as "Sabayil aadum eesan" in Tamil which means "The Lord who dances on the dais". The form is present in most Shiva temples in South India, and is the prime deity in the famous Thillai Nataraja Temple at Chidambaram.

The sculpture is usually made in bronze, with Shiva dancing in an aureole of flames, lifting his left leg (or in rare cases, the right leg) and balancing over a demon or dwarf (Apasmara) who symbolizes ignorance. It is a well known sculptural symbol in India and popularly used as a symbol of Indian culture.[2]

The two most common forms of Shiva's dance are the Lasya (the gentle form of dance), associated with the creation of the world, and the Tandava (the violent and dangerous dance), associated with the destruction of weary worldviews – weary perspectives and lifestyles. In essence, the Lasya and the Tandava are just two aspects of Shiva's nature; for he destroys in order to create, tearing down to build again.

Nataraja is surrounded by The ouroboros or uroboros, which is an ancient symbol depicting aserpent or dragon eating its own tail.

The ouroboros often symbolizes self-reflexivity or cyclicality, especially in the sense of something constantly re-creating itself, the eternal return, and other things such as the phoenix which operate in cycles that begin anew as soon as they end. It can also represent the idea of primordial unity related to something existing in or persisting from the beginning with such force or qualities it cannot be extinguished. While first emerging in Ancient Egypt andIndia, the ouroboros has been important in religious and mythological symbolism, but has also been frequently used in alchemical illustrations, where it symbolizes the circular nature of the alchemist's opus. It is also often associated with Gnosticism, Hermeticism and Hinduism.

Carl Jung interpreted the ouroboros as having an archetypal significance to the human psyche. The Jungian psychologist Erich Neumann writes of it as a representation of the pre-ego "dawn state", depicting the undifferentiated infancy experience of both mankind and the individual child.

This object is part of "Scan The World". Scan the World is a non-profit initiative introduced by MyMiniFactory, through which we are creating a digital archive of fully 3D printable sculptures, artworks and landmarks from across the globe for the public to access for free. Scan the World is an open source, community effort, if you have interesting items around you and would like to contribute, email stw@myminifactory.com to find out how you can h 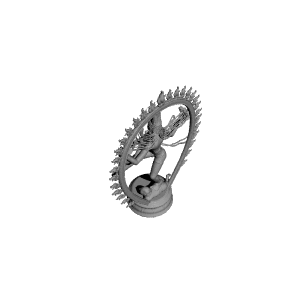 ×
8 collections where you can find Siva Nataraja at the Guimet Museum, Paris by Scan The World