Silver stater coin from Corinth at The British Museum, London

3D
Scan The World
3,979 views 383 downloads
2 collections
Community Prints Add your picture
Be the first to share a picture of this printed object
0 comments

Silver stater coin from Corinth at The British Museum, London

The idea of minting coins in silver was initially adopted by the Greek city states of Aegina, Corinth and Athens. This idea then spread rapidly across the Meditteranean. By the end of the 500s BC, most mints had started making coins with designs on both sides.

The stater (Greek, literally "weight") was an ancient coin used in various regions of Greece. The term is also used for similar coins, imitating Greek staters, minted elsewhere in ancient Europe. The stater, as a Greek silver currency, first as ingots, and later as coins, circulated from the 8th century BC to 50 AD. The earliest known stamped stater (having the mark of some authority in the form of a picture or words) is an electrum turtle coin, struck at Aegina that dates about 700 BC. It is on display at the Bibliothèque Nationale of Paris. According to Robin Lane Fox, the stater as a weight unit was borrowed by the Euboean stater weighing 16.8 grams from the Phoenician shekel, which had about the same weight as a stater (7.0 grams) and was also a fiftieth part of a mina. 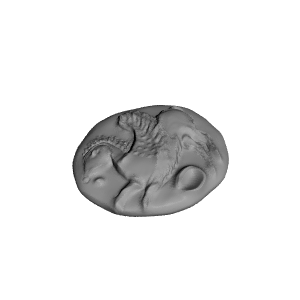 ×
2 collections where you can find Silver stater coin from Corinth at The British Museum, London by Scan The World