The sixth Earl of Plymouth monument can be found on Monument Lane in the village of Lickey, south of Birmingham in the UK. According to the Lickey Community Group (https://www.hugofox.com/community/the-lickey-community-group-18624/home#) the monument was built in 1834 and is made of Anglesey marble. They also say that it is Grade II Listed and was restored, cleaned and re-dedicated in 1995.

An inscription on one side says 'Erected by the Worcestershire Regiment of Yeomanry Cavalry to mark their lasting gratitude to the honoured memory of their beloved and lamented Colonel Commandant and by the county at large to commemorate the disinterested, solid and efficient public services and to commend to imitation the exemplary private virtues of Other Archer Sixth Earl of Plymouth.'

It's not possible to access the monument itself, as it's fenced off. The model was therefore made using OpenSCAD based on dimensions taken from a photograph. The photograph was taken with the camera held vertically and the field of view angles for the camera were used to correct the dimensions to ensure the model is as representative of the actual shape as possible. So while the model isn't completely accurate it should be quite a good representation of the monument for most purposes. 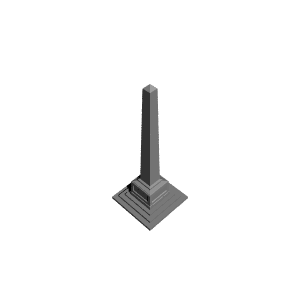