Slab fragment with a palmette relief

3D
Scan The World
1,615 views 59 downloads
Community Prints Add your picture
Be the first to share a picture of this printed object
0 comments

Slab fragment with a palmette relief

Art and architecture flourished during the Middle Byzantine period, owing to the empire’s growing wealth and broad base of affluent patrons. Manuscript production reached an apogee, as did works in cloisonné enamel and stone and ivory carving. An intensified revival of interest in classical art forms and ancient literature reflected Byzantium’s continuous and active engagement with its ancient past throughout the empire’s long history.

Church builders of the ninth to twelfth centuries in general favored smaller or mid-sized churches of domed, centrally planned design, with the “cross-in-square plan” emerging as one of the most popular. Several supports for processional crosses take the form of such church designs. The mosaic and fresco programs decorating the vaulted and domed spaces of these buildings often utilized their curved surfaces for dramatic effect or to complement narrative. Such monumental decoration reveals a careful consideration of how images would relate and respond to one another across space, both vertically and horizontally. During the Middle Byzantine period, figural images and especially icons were increasingly employed for the decoration of the templon, or eastern sanctuary barrier of the Byzantine church, and its adjacent wall spaces. The first great monasteries were built on Mount Athos (Greece), which would become one of the most important and enduring centers of Byzantine Christianity. 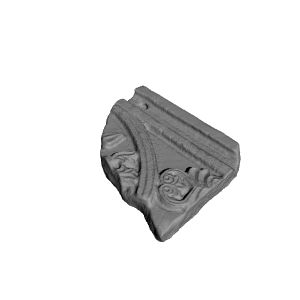