Slab from the Amazon frieze 10

3D
Scan The World
1,004 views 58 downloads
Community Prints Add your picture
Be the first to share a picture of this printed object
0 comments

Slab from the Amazon frieze 10

This, the best preserved of the three friezes from the Mausoleum, shows the expedition by Herakles and Theseus to Themiskyra, and the subsequent battle with the Amazons. This subject was a common theme in Greek art, but it was particularly relevant to Maussollos. According to Karian tradition, an axe owned by the Amazon queen, Hippolyte, was housed at Labraunda, the ancestral sanctuary of the Hekatomnid dynasty. Hippolyte is shown in combat with Herakles on one frieze slab. This important scene may have had a prominent position on the monument, perhaps at the centre of the east side.

The frieze was positioned at the top of the podium of the building. A corner block, found in the Castle of St. Peter at Bodrum, shows that the frieze met at the corners, and probably ran around all four sides of the Mausoleum. The frieze was richly coloured, with the background painted blue, and the flesh of the figures painted deep red, sometimes with added gilding. Weapons, reins, and bridles were sometimes added in metal, according to the preference of a particular sculptor. 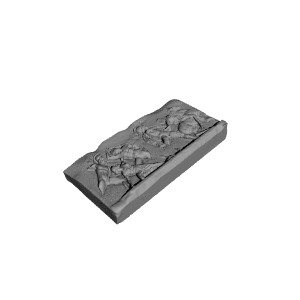