Slab from the Amazon frieze 12

3D
Scan The World
1,627 views 85 downloads
1 collection
Community Prints Add your picture
Be the first to share a picture of this printed object
0 comments

Slab from the Amazon frieze 12

This, the best preserved of the three friezes from the Mausoleum, shows the expedition by Herakles and Theseus to Themiskyra, and the subsequent battle with the Amazons. This subject was a common theme in Greek art, but it was particularly relevant to Maussollos.

According to Karian tradition, an axe owned by the Amazon queen, Hippolyte, was housed at Labraunda, the ancestral sanctuary of the Hekatomnid dynasty. Hippolyte is shown in combat with Herakles on one frieze slab. This important scene may have had a prominent position on the monument, perhaps at the centre of the east side. 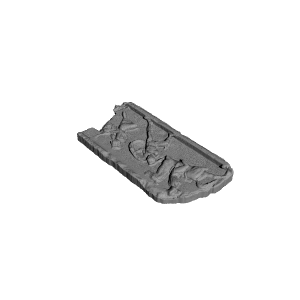