3D
Scan The World
2,154 views 150 downloads
Community Prints Add your picture
Be the first to share a picture of this printed object
0 comments

Marble slab of the Amazon frieze of the Mausoleum of Halikarnassos. It represents combats between Greeks and Amazons.
This slab shows three figures, a Greek and two Amazons, a horse and two figures carved across the join between two slabs (missing and 1013, 1013 and 1014), both Greeks. On the left a mounted Amazon rides down a Greek. The Amazon rides her horse to the left and raises her right hand behind the horse’s head to strike at her opponent, probably with an axe. She leans forward with her head and upper body just visible behind the horse’s head. She wears a chiton open below the belted waist to expose the left thigh and buttock. Her horse was rearing up on its hind legs with only its left hind hoof on the ground. Little remains of the fallen Greek: parts of his outstretched right leg can be seen.
To the right a nude Greek, down on one knee, defends himself against an Amazon on foot. He extends his shield upwards, blocking the Amazon’s thrust. In his right hand he probably held a spear. The Amazon to the right has her right arm raised above her head to strike with an axe or spear. The Amazon wears a chiton belted at the waist.
On the bottom right corner part of the right leg of a Greek, on adjoining slab 1014, is carved.
Metal reins were inserted in drill-holes; the weapons were attached in metal, carved or may have been painted.
Slab 1013 is part of a sequence that continues on slabs 1014 and 1015. 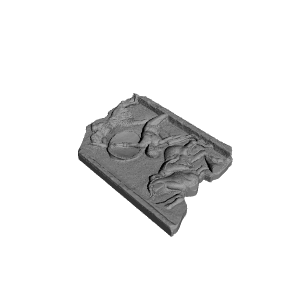