In Greek mythology, Bacchantes were the female followers of Dionysus. The name literally translates as "raving ones", often portrayed as inspired by Dionysus into a state of ecstatic frenzy through a combination of dancing and intoxication.

In art, Bacchantes are depicted either dancing or sleeping. They are often dressed in fox-skin, the penchant of their God. In this sculpture by Johan Peter Molin, the sleeping female is resting on a fox-skin, surrounded by empty chalices and grape vines. 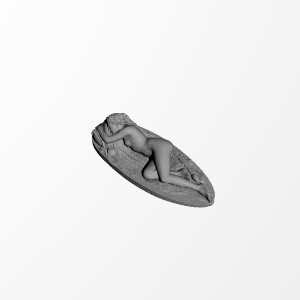 Printed nicely even at low resolution of 0.2, 15% infill on ABS. Thanks. Next time I will print it on white. No supports needed at all.

Great detail at 0.05 resolution on my Prusa Mini. The layer lines are visible in the closeup photo, but not to my naked eye.

The white 3d print on the left was done with Polysmooth PVB and sprayed down with isopropyl to give it a smooth shiny effect. I created a brush-on latex mold over a 3 day period, like a total sloth. The plaster of Paris mother mold to support the latex is hiding under the table. The grey version up top is a concrete cast version produced using the latex mold, produced from the 3d print. It is 13 inches long.