3D
Scan The World
2,989 views 160 downloads
2 collections
Community Prints Add your picture
Be the first to share a picture of this printed object
0 comments

Aristodemo Costoli studied at the Accademia di Belle Arti in Florence, where he became rapidly successful. In the early 1820s he travelled to Rome to work on the Statue of Menoeceus, the Son of Creon, which was first exhibited in 1830 to great acclaim. According to archival research by Dr Elena Marconi, Costoli is recorded to have first modelled a plaster with the subject of the Sleeping Endymion during his time at the Accademia, and showed it at the institute's annual exhibition of 1825. Further correspondence between Costoli and the Academy indicates that he was hoping to obtain a block of high quality marble in order to sculpt the marble version of the Endymion. It also appears that Costoli already had a buyer interested in the marble, but unfortunately it is not known who his client was.

Stylistically and iconographically, the sculpture fits well within the sculptor's oeuvre as well as the period in which it was conceived. Compare the strands of hair with short curls to a figure on the left side of the monument to Guido Alberto in Santa Maria del Fiore a Lapo in Florence (op. cit., figs. 55 and 56); and further to an angel on the Monument to Henrietta Sanford (op. cit., fig. 34). The subject of Endymion Sleeping was particularly popular in Italy during the Neoclassical period, with Antonio Canova's The Sleeping Endymion (Sculpture Gallery, Chatsworth House) perhaps being the most famous example.

In Greek mythology, Endymion was variously a handsome Aeolianshepherd, hunter, or king who was said to rule and live at Olympia in Elis. He was also venerated and said to reside on Mount Latmus in Caria, on the west coast of Asia Minor.

There is confusion over Endymion's correct identity, as some sources suppose that he was, or was related to, the prince of Elis, and others suggest he was a shepherd from Caria. There is a later suggestion that he was an astronomer: Pliny the Elder[3] mentions Endymion as the first human to observe the movements of the moon, which (according to Pliny) accounts for Endymion's love. As such, there have been two attributed sites of Endymion's burial: the citizens of Heracleia ad Latmo claimed that Endymion's tomb was on Mount Latmus, while the Eleans declared that it was at Olympia.

However, the role of lover of Selene, the moon, is attributed primarily to Endymion who was either a shepherd or an astronomer, either profession providing justification for him to spend time beneath the moon 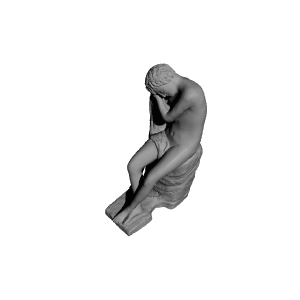