3D
Scan The World
2,648 views 184 downloads
1 collection
Community Prints Add your picture
Be the first to share a picture of this printed object
0 comments

Harriet Hosmer's The Sleeping Faun received widespread critical acclaim when the model was exhibited at the 1865 Dublin Exhibition. The beautifully conceived group is indebted to Neoclassical precedents and shows the clear influence of Hosmer's teacher John Gibson (1790-1866). Describing the version in the Museum of Fine Arts Boston (inv. no. 12.709), Jan Seidler Ramirez noted that 'the faun's form is that of a beautiful, perfectly proportioned adolescent; only his pointed ears provide a clue to his mythological origins ... Compositional skill and carving expertise are readily apparent in The Sleeping Faun. Hosmer's elegant, fluid control of lines coaxes the viewer's eye to ascend the composition, proceeding from the faun's extended limb and rising up the graceful curve of the torso, to pause at the face before descending to the figure's limp arm. The satyr nestled against the tree stump completes the design, having been introduced for purposes not only of story and contrast of mood but also balance' (op. cit., pp. 163-164). Aside from the version in the MFA, which is of similar dimensions, other versions are at the Walker Art Gallery, Liverpool and the Cleveland Museum of Art (inv. no. 1997.15)

Harriet Hosmer was a remarkable sculptor and woman who defied the 19th-century notions of femininity.  She led what was considered at the time to be a bohemian lifestyle. Born in Watertown, Massachusetts, Hosmer knew at the age of 19 that she wanted to be a sculptor.  Early on she flouted convention and went to St. Louis to study anatomy at the all-male Washington University Medical School.  In 1852 she departed for Rome to study with John Gibson.  In Rome she developed close friendships within the Anglo-American community including the Brownings and Nathaniel Hawthorn. 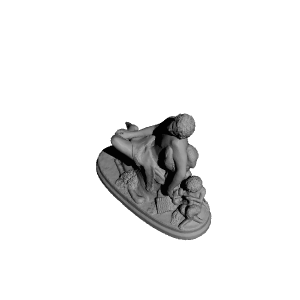