Sleeping Faun at The Museum of Fine Arts, Boston

3D
Scan The World
5,653 views 257 downloads
2 collections
Community Prints Add your picture
Be the first to share a picture of this printed object
0 comments

Sleeping Faun at The Museum of Fine Arts, Boston

Exhibited before millions of visitors at international exhibitions, Harriet Hosmer's depiction of an inebriated faun sprawled against a tree stump was one of her most highly acclaimed works. Contemporary critics agreed that Hosmer had captured the graceful curves and sensual finishes of Greek Hellenistic sculpture in the adolescent faun's perfect proportions, smooth skin and languorious pose, while at the same time evoking a mood of playfulness and whimsy. The bunch of grapes and the panpipe littered on the ground refer to the faun's merry carousing, and his pointed ears and tiger-skin drapery indicate his animalistic nature. In counterpoint to his peaceful sleep, a mischievous satyr ties the faun to the tree stump with the ends of the tiger skin. Hosmer employed tremendous carving skill to create the varied textures of the faun's sensual body, the rough tiger skin, the mossy forest floor, the firm grapes and the satyr's thick, curly hair.

ne of the nineteenth century’s most accomplished female artists, Hosmer received a progressive education at a boarding school in Lenox, Massachusetts, where her mentors encouraged her to seek a way of life not bound by then current conventions of womanhood. She began studying sculpture in the United States but moved to Rome in 1852 to advance her education, becoming the first American woman sculptor to do so. There, she studied with England’s leading Neoclassical sculptor, John Gibson. By the mid-1850s Hosmer’s work was received warmly by critics, and she became a colorful figure in American and European artistic circles, known for her unorthodox lifestyle. In a testimonial to her own independence, Hosmer remarked in 1868, “I honor every woman who has strength enough to step outside the beaten path when she feels that her walk lies in another; strength enough to stand up and be laughed at, if necessary.” 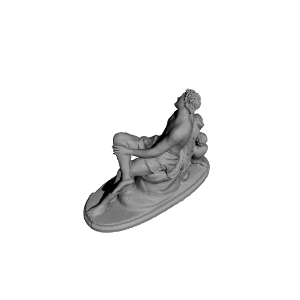 ×
2 collections where you can find Sleeping Faun at The Museum of Fine Arts, Boston by Scan The World