3D
Scan The World
7,305 views 466 downloads
3 collections
Community Prints Add your picture
Be the first to share a picture of this printed object
0 comments

‘The Greeks carried sculpture to the highest possible degree of perfection. Their teacher was Nature alone, under whose guidance they established the standard of beauty.’

Thus spoke John Gibson (1790 – 1866) for whom the masterpieces of antique art were the primary source of inspiration through his long artistic career. Gibson, who was to become the foremost British sculptor of his generation, was first introduced to the history and theory of art under the guidance of William Roscoe, the Liverpool connoisseur and historian who first recognised his talents.

It wasn’t until he moved to Rome in 1817, however, that his academic training truly got underway. There he was instructed by Canova (1757-1822) and Thorvaldsen (1770-1844), the most famous sculptors of the period, and following their lead, drew on ancient historic and mythological figures for his subject matter. Gibson was well versed in the theory underpinning Neo-classical art and was a keen follower of Winckelmann (1717 -1768), ‘patron saint’ of the movement. He shared the German’s delight in the ‘noble simplicity and calm grandeur’ of Greek art and firmly adhered to the conviction that only by imitating the Ancients could ‘the moderns… become great and perhaps unequalled’.

The Sleeping Shepherd Boy was the first life-size figure modelled by Gibson in Rome under the supervision of Canova. The subject, a classical shepherd boy, was prevalent among sculptors in Rome at the time – Canova’s Sleeping Endymion was modelled 1818, and Thorvaldsen’s Shepherd Boy in 1817. The Venetian master had accepted Gibson into his academy upon his arrival in the Eternal City at the relatively advanced age of 27.

While the early stages of his training involved copying classical figures at the Vatican and Capitoline Museums, he quickly progressed to working from the live model. Canova advised him ‘to copy nature, but at the same time you are working from the life, go constantly and look at the antique; not to model copies from any of the statues, but always to examine them, and that carefully, until you have gained a perfect knowledge of their principles, and are aware of all their perfection.’

That Gibson took this counsel to heart is apparent in his Sleeping Shepherd, which marks the beginning of his artistic maturity. The pose is derived from an antique relief encountered in the Capitoline Museum, Seated Endymion sleeping on Mount Latmos, which he admired as the work of ‘a great master’. The smoothly-carved surfaces of the body and the idealised proportions echo the traditions established by Canova and Thorvaldsen, yet Gibson’s unique sculptural style is already clearly visible.

While his interpretation of the theme is straightforward and unassuming in scale, the design is highly competent and not deficient in feeling. Sitting on a tree stump, asleep with his staff leaning on his leg, the entire figure gives an impression of calm and repose. His head tilts toward his left shoulder as he sleeps, part of his cloak draped across his right thigh, modestly covering his nudity. In the sweetness of his expression and the detailed depiction of the hair and lamb’s fleece covering the tree stump, this portrayal of an anonymous shepherd boy is close in style to a genre piece.

Rather than some abstract personification of ideal love or beauty, it resembles a scene from daily life, a boy whose eyes have momentarily closed in sleep, allowing him a brief escape from routine duties. Indeed Gibson, in his biographical notes, alluded to Roman street life as a source of inspiration, admitting that the poses of people encountered on his daily promenades frequently informed his compositions.

Gibson started working on the clay model of The Sleeping Shepherd Boy in 1818, but it was not until 1824 that a marble statue was ordered. The patron was Lord George Cavendish, uncle of the 6th Duke of Devonshire, who five years previously had commissioned a marble of another early Roman work, Mars and Cupid, thereby becoming Gibson’s first patron and bringing him to the attention of other prominent collectors in his native land.

The Walker’s Sleeping Shepherd was made for Lord Prudhoe of Stanwick Park, Yorkshire, later Duke of Northumberland, and completed by 1834 costing £300. It is believed that this was the version exhibited at the Royal Academy in 1835, considered by The London Literary Gazette and Journal of Belles Lettres, Arts, Sciences to be ‘conceived with great taste, and executed with equal skill; but a shepherd – man or boy – ought to be watchful’.

A third marble of The Sleeping Shepherd was made for James Lennox of New York in 1851.

The Sleeping Shepherd Boy was purchased by the Walker Art Gallery in 1988 with help from the National Art Collection Fund. The original model in plaster is held by the Royal Academy. Other works by Gibson in the collections of National Museums Liverpool include: The Tinted Venus, Love Tormenting the Soul, Cupid in Disguise, The Three Graces, Bust of Helen and Cupid Pursuing Psyche – all on display at the Walker. 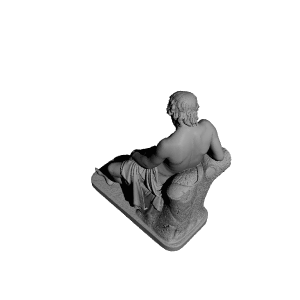 ×
3 collections where you can find Sleeping Shepherd Boy at The Walker Art Gallery, United Kingdom by Threedscans