3D
Scan The World
1,847 views 72 downloads
Community Prints Add your picture
Be the first to share a picture of this printed object
0 comments

We do not know if there was ever a portrait of Socrates that survived. Only a statue raised in his memory by the Athenians, half a century after his death, and which was due to the art of Lysippus, is attested. Did she represent him as he was? Plato and Aristotle had noted some features of his physique that would correspond to the oldest known type of his portraits. These spread widely in the ancient world, especially in Roman times. 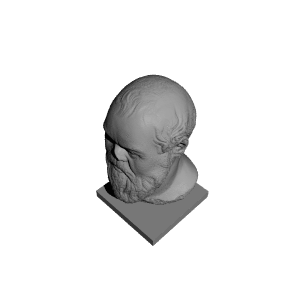