Socrates at the MoMa, New York

3D
Scan The World
3,028 views 134 downloads
Community Prints Add your picture
Be the first to share a picture of this printed object
0 comments

Socrates at the MoMa, New York

The philosopher Socrates remains, as he was in his lifetime (469–399 B.C.E.), an enigma, an inscrutable individual who, despite having written nothing, is considered one of the handful of philosophers who forever changed how philosophy itself was to be conceived. All our information about him is second-hand and most of it vigorously disputed, but his trial and death at the hands of the Athenian democracy is nevertheless the founding myth of the academic discipline of philosophy, and his influence has been felt far beyond philosophy itself, and in every age. Because his life is widely considered paradigmatic for the philosophic life and, more generally, for how anyone ought to live, Socrates has been encumbered with the admiration and emulation normally reserved for founders of religious sects—Jesus or Buddha—strange for someone who tried so hard to make others do their own thinking, and for someone convicted and executed on the charge of irreverence toward the gods. Certainly he was impressive, so impressive that many others were moved to write about him, all of whom found him strange by the conventions of fifth-century Athens: in his appearance, personality, and behavior, as well as in his views and methods.

Brancusi's oak sculpture, standing 51.25 inches including its base, captures Socrates's appearance and strangeness in the sense that it looks different from every angle, including a second “eye” that cannot be seen if the first is in view. 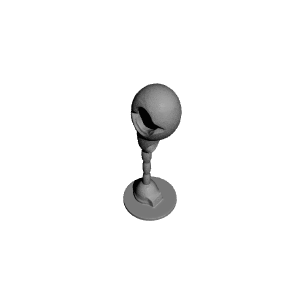 ×
0 collections where you can find Socrates at the MoMa, New York by Scan The World