3D
Scan The World
4,589 views 530 downloads
2 collections
Community Prints Add your picture
Be the first to share a picture of this printed object
0 comments

Socrates (469/470-399 BCE) was a Greek philosopher and is considered the father of western philosophy. Plato was his most famous student and would teach Aristotle who would then tutor Alexander the Great. By this progression,Greek philosophy, as first developed by Socrates, was spread throughout the known world during Alexander's conquests.

Socrates was born c. 469/470 BCE to the sculptor Sophronicus and the mid-wife Phaenarete. He studied music, gymnastics, and grammar in his youth (the common subjects of study for a young Greek) and followed his father's profession as a sculptor. Tradition holds that he was an exceptional artist, and his statue of the Graces, on the road to the Acropolis, is said to have been admired into the 2nd century CE. Socrates served with distinction in the army and, at the Battle of Potidaea, saved the life of the General Alcibiades. 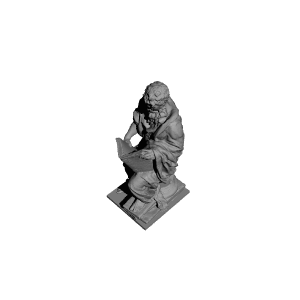 ×
2 collections where you can find Socrates in Alba Iulia, Romania by apllana