3D
Scan The World
4,097 views 131 downloads
Community Prints Add your picture
Be the first to share a picture of this printed object
0 comments

Solar Bird is a 1966 sculpture by Spanish artist Joan Miró. Several institutions have copies in their collections, including:

Joan Miró was one of the most eminent and prolific artists of the 20th century. The Museum of Modern Art’s Miró holdings include three of the most important bronzes in MoMA’s collection:Lunar Bird and Solar Bird (both edition 2/5) cast in 1966 at the Susse Foundry in Paris, France, and Personage and Bird (edition 1/2) cast in 1968 at the Parellada Foundry in Barcelona, Spain. While the Susse Foundry was able to engineer large-scale versions of earlier maquettes, Parellada Foundry provided an outlet for Miró’s artistic experiments. Unlike the smooth-formed sculptures cast at the Susse Foundry, the Parellada sculptures are smaller in scale and are cast from assemblages of found objects. All three works were produced as multiples—therefore, information pertaining to their production technique, metallurgical and patina composition, condition, and appearance is applicable to numerous other Miró bronzes in other collections. Given that casting techniques and alloy recipes tend to remain consistent within foundries; this research is relevant to bronzes cast by other artists at the Susse and Parallada foundries during this time period including Henry Moore, Jean Arp, Fernando Botero, and others. Lunar Bird andPersonage and Bird were both acquired by MoMA in 1994. Shortly after its accession, Lunar Birdwas installed in the Museum’s sculpture garden, where it is currently on view. The work has required only minor treatment to address surface scratches and touch-ups of patina, and the sculpture remains in good condition. Personage and Bird went directly into offsite storage. In August 2014, severe surface delamination was discovered when the object was uncrated for photography. MoMA acquired Solar Bird from the Cigna Corporation in 2005. Years of outdoor exhibition and lack of maintenance had significantly altered the surface and patina of the sculpture. Solar Bird remains in the Museum’s storage facility. While Lunar Bird and Solar Birdwere brought into the museum from different collectors, they could reasonably be viewed as a pair, given that they are both 1966 casts from Susse Foundry. A comprehensive comparison of surface, patina, structural concerns, and metallurgical content reveals their similarities and differences. Personage and Bird is unique in the Museum’s Miró holdings—the work’s size, appearance, condition, and casting method differ considerably from the Lunar Bird and Solar Bird, offering a wider view of Miró’s bronzes. Scientific analysis of the alloys and patina in combination with research into the casting methods and other editions informs maintenance, treatment, and preventive care for these three objects. This presentation will review the results from the documentation and analysis of the sculptures, including photogrammetry, x-ray fluorescence, x-radiography, and scanning electron microscopy. Other editions of these sculptures will be discussed and comparative metallurgical and visual documentation will aid in understanding the condition and treatment goals of MoMA’s objects. Finally, research into both the casting methods and alloys of the Susse and Parellada foundries and the art historical study of Miró’s sculpture making will allow for a fuller understanding of these objects within Miró’s oeuvre and 20th century bronze casting techniques. 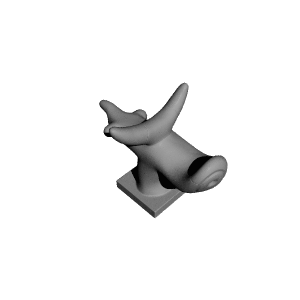 ×
0 collections where you can find Solar Bird at The Fundació Joan Miró, Barcelona by Scan The World