3D
2,015 views 73 downloads
1 collection
Community Prints Add your picture
Be the first to share a picture of this printed object
0 comments

This is my sixteenth entry for the 30 Characters Challenge. Each day in November I'll be designing and posting a new model (though the prints may come a tad later, depending on how on-the-ball I am). Each character is randomly generated using the Continuum Narrative Engine (a storytelling game system currently in the works here at the Ill Gotten Games headquarters). I'll get the rest posted here as I print them, but for now you can follow the WIP models here...

One of a secretly produced run of sapient robots built from schematics stolen from the late Dr. Harlan Smythe, Unit H42-B was gifted to Jules Calixa, heiress to the Calixa fortune and major Circle-Tech shareholder. Though designed as a companion unit, Jules found many uses for the android, nicknaming him â€œSolverâ€ as his penchant for rapid-learning resulted in the acquisition of many useful skills, including the operation and repair of Julesâ€™ Brane-Ship, the Castellan. As his mistressâ€™ affections for him grew stronger, so to did Solverâ€™s bond and desire to protect her. Against Circle-Techâ€™s advice, Jules had many of Solverâ€™s control sub-systems removed, leaving only the protocol that binds him to her service, adding a caveat that the program will deactivate in the event of her death, leaving Solver free to walk his own path.

Model designed in Sculptris and TinkerCAD, printed on my Makerbot Replicator and painted with water based acrylics.

Printed with a 10% infill at a .10 layer height, extruder temp at 230. After he was assembled, he was painted with water-based acrylics. 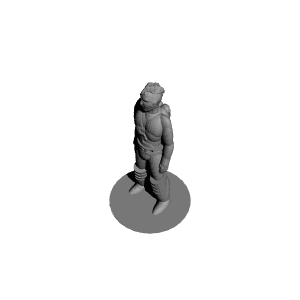 ×
1 collections where you can find Solver, Android Companion by dutchmogul