3D
1,526 views 35 downloads
Community Prints Add your picture
Be the first to share a picture of this printed object
0 comments

This object was made in Tinkercad for the 3D Design and Print Competition.  They could hear the crowds cheering for all of the Pilots. Sonya the fearless Fairy Dragon and her Ecstatic Co-pilot Pip where starting up there turtle jet as the last few contestants lined up. They looked at each other with determination and nodded and they fastened their last straps. "3,2,1" said the announcer. And within a blink of an eye "GO" yelled the Flagger as the confetti popped out of the ground below them and boosted them up to start to fly.  As Sonya bobbed and weaved through the obstacles and rings in the air Pip warned, " Another pilot, 3 o'clock!" Sonya jerked up on the  paddles to dodge the water blaster coming from the other pilot next to her. "Great Job! Said Pip. "Now Keep going forward!!" As Sonya started to thrust forward with the boosters she noticed another pilot diving straight down because of a damaged wing. "(It must have been from the water blast)" Sonya thought to herself. She quickly turned around the Turtle jet as said to Pip, " Activate the grabbers Pip!!" Pip quickly pressed the button and made it easy to make the quick save. Sonya heard the winning buzzers go off and realized that they had lost. As they crossed the finish line in 9th place they gently set down the other pilot who was known as Teddy. They safely landed and Teddy got out of his plane. "Thank you for saving me! That as a close one! My career could have been ruined!" Teddy said as he bowed repeatedly. "No need to thank us! We're just doing our job!" Sure right!!" Pip said enthusiastically. "Wait then who are you?" Teddy asked in confusion from the thought that they were both normal pilots. "I'm Sonya and this is my Co-pilot Pip!" Sonya said with joy." And we're the mercy flight for the show!" Pip said with a wink. "then why did you act so competitive when flying?" Teddy asked. "We try to get ahead of the action to get  good view to watch for any accidents like that." Sonya explained. "Oh, that would make sense!" Teddy said with a chuckle. And they all laughed, The end. 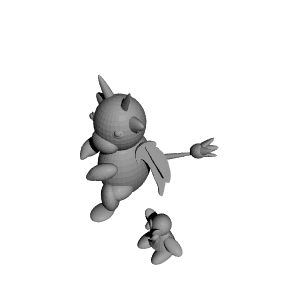 ×
0 collections where you can find Sonya and Pip by eanderson