Sophia on a boat (Owl)

3D
Scan The World
1,476 views 58 downloads
Community Prints Add your picture
Be the first to share a picture of this printed object
0 comments

Sophia on a boat (Owl)

This is an abstract sculpture representing an owl from the front and transforming into an ancient boat at the back. The owl represents Sophia, a central idea in Hellenistic philosophy and religion, Platonism, Gnosticism, and Christian theology. Originally carrying a meaning of "cleverness, skill", the latter meaning of the term, close to the meaning of Phronesis("wisdom, intelligence"), was significantly shaped by the term philosophy ("love of sophia") as used by Plato. In the Eastern Orthodox and the Catholic churches, Holy Wisdom (Αγία Σοφία Hagía Sophía) is an expression for God the Son(Jesus) in the Trinity (as in the dedication of the church of Hagia Sophia in Constantinople) and, rarely, for the Holy Spirit. References to Sophia in Koine Greek translation of the Hebrew Bible translate to the Hebrew term Chokhmah.

The sculptor said about his sculpture: "The work symbolizes the form of glaucoma, the wisdom inspired by Cyprus as a place and as a story, always overwhelmed by the sound of the song" Gold-leaf ", my mind staffed with the ancient trireme! Trembling wisdom and bow mind to the realization of the dream! " 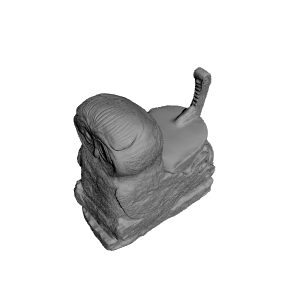