3D
360°
Scan The World
1,627 views 98 downloads
1 collection
Community Prints Add your picture
Be the first to share a picture of this printed object
0 comments

Countess Sophia Andreyevna Tolstaya (1844–1919), was a Russian diarist, and the wife of Russian writer Leo Tolstoy.

The Tolstoys had 13 children, eight of whom survived childhood. The family was prosperous, owing to Tolstoy's efficient management of his estates and to the sales of his works, making it possible to provide adequately for the family.

Sophia acted as copyist of War and Peace and also took up photography in 1887. She took over a thousand photographs that documented her life and the decline of the pre-Soviet Russian Empire. She documented her life with Leo Tolstoy in a series of diaries which were published in English translation in the 1980s. Tolstaya wrote her memoirs as well, which she titled My Life.
After many years of an increasingly troubled marriage — the couple argued over Tolstoy's desire to give away all his private property — Leo left Sophia abruptly in 1910, aged 82, and died soon after. Following the death of her husband, Sophia continued to live in Yasnaya Polyana and survived the Russian Revolution in relative peace.

In this plaster portrait, she is shown middle aged and 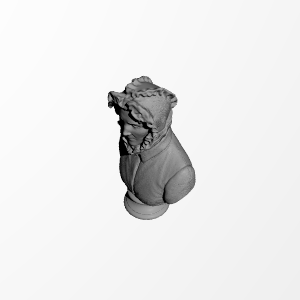