The Oath of Spartacus at The Jardin des Tuileries, Paris

The Oath of Spartacus at The Jardin des Tuileries, Paris

The oath of Spartacus is a marble sculpture by Louis-Ernest Barrias, created between 1869 and 1871 based on a plaster piece by the same artist. Since 1875, it can be viewed in Le Jardin des Tuileries. Paris.

This sculpture depicts a dying man attached to the remains of a tree on which he was being crucified. His left arm and his head rests on a young boy standing at his side. The boy with his wavy hair and determined look, once held a knife in his right hand which is now damaged. His left hand affectionately holds two fingers of the hand of the dying slave.

The title suggests that this is young Spartacus, vowing to avenge this man's death. Within the Roman Empire, crucifixion was a punishment reserved for those who were not Roman citizens, most often slaves, robbers, pirates, but also sometimes prisoners of war, or those condemned for political reasons. In any event, this poignant scene is actually completely imaginary: indeed, we know nothing of the childhood of the young Thracian, who around the age of thirty, between 73 and 71 BC., would shake the Roman power in the worst slave revolt that it had known in the Third Servile War.

The strength of the work is the contrast between the love and sweetness of the boy standing next to this tormented man and his determination. The tender way he holds two of the man’s fingers as the man leans forward to cradle the boy under his strong left shoulder. The boy rests his arm on the leg of the man, while also holding a knife and with a look of vengeance on his face. Like divine justice, he leaves no doubt about his intentions. He will avenge this man for which he feels such tenderness and who is dying at his side. 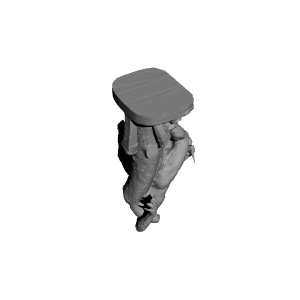 ×
0 collections where you can find The Oath of Spartacus at The Jardin des Tuileries, Paris by humanti
×
Noah Knight
@3dknight
0
Printed on: Delta Tower
Material: PLA
Posted at: 22nd June 2021

About 20cm tall. 0.3mm layer thickness. Custom built Delta printer. Not the best quality plastic. Some clean up is done to the model.