3D
3,604 views 165 downloads
2 collections
Community Prints Add your picture
Be the first to share a picture of this printed object
0 comments

I wanted some new eye-candy for my tronxy X3 3D printer. I figured the legs could not only hold the printer up, but also be nice eye-candy. I decided to attempt to do the legs in a clawfoot style. I have only mostly seen the style on clawfoot tubs. I based the foot around a sphere, so the foot does have those spherical curves to it. I was able to print the feet in the pictures above without any support. I was however told that I should consider moving away from using a sphere and instead use an oval egg like shape. I may eventually take that advice and produce a foot with an egg shape center. If you have any problems let me know. I like to hear constructive feedback. I also like to see makes as well.

Printer : Wanhao duplicator i3 v2
Rafts : Doesn't Matter
Supports : Doesn't Matter
Resolution : .8
Infill : 15
Notes : I printed the model above on my wanhao as the tronxy currently has a 1.2mm nozzle on it that would remove a lot of the small details. Like I wrote above the print in the pictures was printed without supports. Use them if you think you need them. If you absolutely cannot get these to print let me know, I might make some based on the egg shape for easier printing. 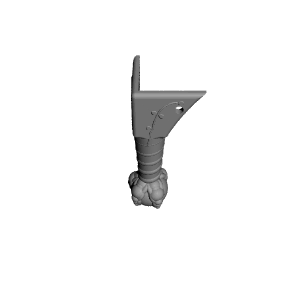