The sculpture was one of the very few Roman bronzes that was never lost to sight. It was standing outside the Lateran Palace when the Navarrese rabbi Benjamin of Tudela saw it in the 1160s and identified it as Absalom, who "was without blemish from the sole of his foot to the crown of his head." It was noted in the late twelfth or early thirteenth century by the English visitor, Magister Gregorius, who noted in his De mirabilibus urbis Romae that it was ridiculously thought to be Priapus. It must have been one of the sculptures transferred to the Palazzo dei Conservatori by Pope Sixtus IV in the 1470s, though it is not recorded there until 1499-1500. It was celebrated in the Early Renaissance, one of the first Roman sculptures to be copied: there are bronze reductions by Severo da Ravenna and Jacopo Buonaccolsi, called "L'Antico" for his refined classicizing figures: he made a copy for Isabella d'Este about 1501 and followed it with an untraced pendant that perhaps reversed the pose. For a fountain of 1500 in Messina, Antonello Gagini made a full-size variant, probably the bronze that is now in the Metropolitan Museum of Art, New York.

A very nice print that requires supports. Be careful when removing the supports from the face. 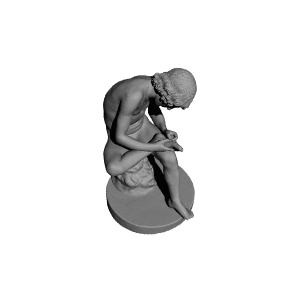 ×
4 collections where you can find Spinario at the Institut für Klassische Archäologie, Vienna by Threedscans
×
Richard
@RichardH
2
Printed on: Prusa i3 MK3
Material: PLA
Posted at: 03rd August 2021