Springtime at the Palais des Beaux-Arts in Lille, France

3D
Scan The World
3,878 views 312 downloads
1 collection
Community Prints Add your picture
Be the first to share a picture of this printed object
0 comments

Springtime at the Palais des Beaux-Arts in Lille, France

This is a marble sculpture by French sculptor Albert-Ernest Carrier-Belleuse (12 June 1824 – 4 June 1887). Carrier-Belleuse made many terracotta pieces, the most famous of which may be The Abduction of Hippodamei adepicting the Greek mythological scene of a centaur kidnapping Hippodameia on her wedding day. He was also made artistic director at the Manufacture nationale de Sèvres in 1876.

In 1862 Carrier-Belleuse was one of the founding members of the Société Nationale des Beaux-Arts, and was made an Officier of the Légion d'honneur. The bronzes he executed prior to 1868 were always signed "Carrier" or "A. Carrier", but after 1868 his signature was changed to "Carrier-Belleuse".

His work encompassed all manner of sculptural subjects and materials, and his naturalism incorporated a breadth of styles: unembellished Realism, neo-Baroque exuberance, and Rococo elegance.

This is his rendition of a popular series of sculptures depicting the seasons, this one being the personification of spring, carrying a wreath of blooming flowers. It is on display at the Palais des Beaux-Arts in Lille, France. Many of his other works can be found in auctions and across Paris and France such as the Musée D'Orsay. 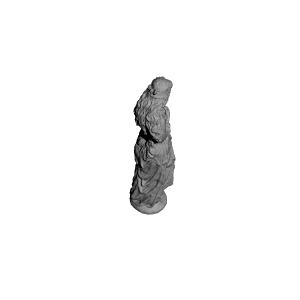 ×
1 collections where you can find Springtime at the Palais des Beaux-Arts in Lille, France by Scan The World