Spyro the Dragon is a title character and the protagonist of the Spyro the Dragon, The Legend of Spyro, and later became a part of the Skylanders series. First introduced in the 1998 video game Spyro the Dragon, Spyro is a young, energetic, purple Dragon with orange medium-sized wings, large, curved horns (most of the time), a spiral-shaped spike on the tip of his tail, and spikes resembling a mohawk. He is noticeably smaller than most other dragons portrayed in the series; a characteristic that aids him in the first game. In the original series, most dragons are depicted as bipedal; however, Spyro is depicted as quadrupedal. In the newer series, his back-story was that two thieves were running through the dragon realms and the dragons stopped them. They had two eggs, and the dragons adopted them as their own. They later hatched into Spyro the Dragon and Sparx the Dragonfly. 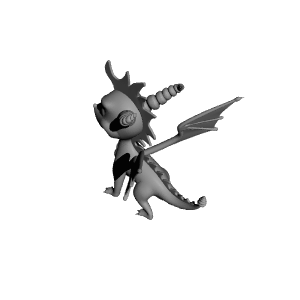 Spyro after supports have been removed. 0.1mm layer over 10 hour build time.