St. Anne With the Virgin Mary and Christ Child at The Kiev Museum of Western and Oriental Art, Ukraine

3D
Scan The World
6,318 views 434 downloads
1 collection
Community Prints Add your picture
Be the first to share a picture of this printed object
0 comments

St. Anne With the Virgin Mary and Christ Child at The Kiev Museum of Western and Oriental Art, Ukraine

The relationship of St. Anne to the immaculate conception of her daughter is not explicit, but her mystical participation is implied in the nested framing of her embrace of her virgin daughter embracing her divine grandson. This should not be confused with theperpetual virginity of Mary or the virgin birth of Jesus. Although the belief was widely held since at least Late Antiquity, the doctrine was not formally proclaimed until December 8, 1854 when it was dogmatically defined in the Western Latin Rite by Pope Pius IX via his papal bull, Ineffabilis Deus. It was never explicitly so in the Eastern churches; see discussion on dogma below. 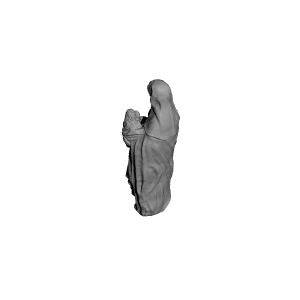 ×
1 collections where you can find St. Anne With the Virgin Mary and Christ Child at The Kiev Museum of Western and Oriental Art, Ukraine by Scan The World