3D
Scan The World
2,838 views 242 downloads
2 collections
Community Prints Add your picture
Be the first to share a picture of this printed object
0 comments

This is an original wood sculpture of St. Catherine. She is a Christian saint and virgin, who was martyred in the early 4th century at the hands of the pagan emperor Maxentius. According to her hagiography, she was both a princess and a noted scholar, who became a Christian around the age of 14, converted hundreds of people to Christianity, and was martyred around the age of 18. More than 1,100 years following her martyrdom, Saint Joan of Arc identified Catherine as one of the Saints who appeared to her and counselled her. 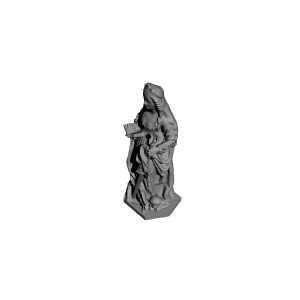 ×
2 collections where you can find St. Catherine by Scan The World