3D
360°
Featured Scan The World
1,963 views 59 downloads
1 collection
Community Prints Add your picture
Be the first to share a picture of this printed object
0 comments

In this sculpted image, St. Geroge is the young hero of medieval legens: armoured as a knight, he fights against the dragon that had captured a princess, killing it with a lance (now missing). The episode represents the triumph of the spirit and intelligence over irrationality and evil, personified by the monster.

The verticality of this piece, accentuated by the raised left arm and the expression of the head, leaning to the right to accompany the dynamics needed to deliver the final blow, as well as the position of the sain's feet, announce the movement of the sculpture. This piece is an imported work. 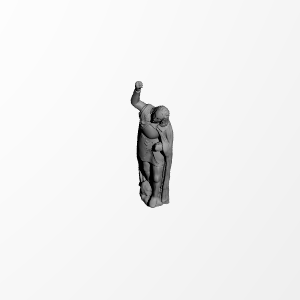 ×
1 collections where you can find St. George by CEG