St. George at The Kiev Museum of Western and Oriental Art, Ukraine

St. George at The Kiev Museum of Western and Oriental Art, Ukraine

St. George was the patron saint of the armorer’s guild and was known as a military figure, one who was well-known in the Byzantine East, but who was also known by the Crusaders who battled Muslim forces in the Holy Land.  A popular tale involving St. George defeating the dragon came to be known through the collection of stories called the Golden Legend (Legenda Aurea) in the late thirteenth century.

In Donatello’s work, St. George was carved with a confident posture.  He stands tall with his shield in front of him that looks as if could rotate on its small base which touches the ground.  This implies, at the very least, a sense of readiness on the part of the saint to quickly confront enemies coming from different directions.  To enhance the look of the statue, the guild created special special adornments for it, which might have been put on display on special days of the year, such as the Feast of St. George.  These adornments would have included a sword, held in his right hand, a helmet, and a belt.  They would have given the statue a bold appearance of metal on marble, and the sword would have projected forward, out of the niche, creating a very visible statement to all walking down the street in front of Orsanmichele.

Unlike the statue of St. Mark, the statue of St. George does not stand in contrapposto.  Instead, both legs are clearly supporting the saint’s weight, although the front of his left foot is not completely planted on the ground, but instead partially hangs off the front of the base.  The purpose of the stance that Donatello gave to St. George was to suggest stability and immobility; he is not supposed to be interpreted as moving, but instead, as stable and unmoveable.  This is a defensive posture.

The reason for such a stance has been linked to political events surrounding Florence during the years leading up to the statue’s creation.  Although Florence was a free Republic during this time, it faced threats by other cities who were more powerful than itself.  One of these cities was Milan, which had been led in 1402 by Gian Galeazzo Visconti to the doorstep of Florence.  With the city surrounded and Florence on the verge of invasion, disease swept through the Milanese army, forcing it to withdraw.  Around the year 1410, a different threat emerged from the south.  An army from Naples, led by a tyrant, moved north and again Florence was in danger of being invaded.  However, before the threat could turn into disaster for the Florentines, the Neapolitan tyrant was struck by a disease and died.  Thus, Florence was spared again from being the conquest of a more powerful foe.  Donatello’s depiction of St. George seems to reflect the idea of standing tall against an approaching enemy.  It was a spirit that must have been shared by Florentines of the day on account of contemporary events, and Donatello used it as the source for the disposition of his statue.

The spirit of standing strong against one’s enemies also seems to be reflected in the face of St. George.  He turns his neck slightly to his left, his mouth is barely opened, and his pupils show a glance which is up and to his left, rather than directly in front of him.  His expression is one of intense concentration, reflected in his wrinkled brow.  This is a look of courage and resolve; this is a figure who will not back down.  Thus, St. George’s facial expression complements the posture of his body to create a memorable statement not only about this man in particular, but also about the Florentine spirit in general. 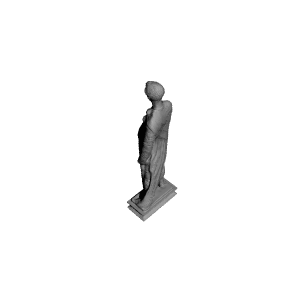 ×
1 collections where you can find St. George at The Kiev Museum of Western and Oriental Art, Ukraine by Scan The World
×
Brett Mulvany
@BrettMulvany
1
Printed on: Anet A8
Material: PLA
Posted at: 24th October 2021