St John the baptist at The National Art Museum of Copenhagen, Denmark

3D
Scan The World
5,237 views 318 downloads
2 collections
Community Prints Add your picture
Be the first to share a picture of this printed object
0 comments

St John the baptist at The National Art Museum of Copenhagen, Denmark

John the Baptist was an itinerant preacher and a major religious figure in Christianity, Islam (known as Yahya ibn Zakariyya), the Bahá'í Faith, and Mandaeism.
John is described as having the unique practice of baptism for the forgiveness of sins. Most scholars agree that John baptized Jesus. Scholars generally believe Jesus was a follower or disciple of John and several New Testament accounts report that some of Jesus' early followers had previously been followers of John.John the Baptist is also mentioned by Jewish historian Josephus. Some scholars maintain that John was influenced by the semi-ascetic Essenes, who expected an apocalypse and practiced rituals corresponding strongly with baptism, although no direct evidence substantiates this.
According to the New Testament, John anticipated a messianic figure greater than himself, and Jesus was the one whose coming John foretold. Christians commonly refer to John as the precursor or forerunner of Jesus, since John announces Jesus' coming. John is also identified with the prophet Elijah.

Andrea di Cristoforo Bregno (1418–1506) was an Italian sculptor and architect of the Early Renaissance who worked in Rome from the 1460s and died just as the High Renaissance was getting under way.

All information belong to Wikipedia 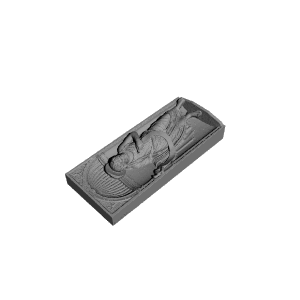 ×
2 collections where you can find St John the baptist at The National Art Museum of Copenhagen, Denmark by geoffrey.marchal