3D
Scan The World
2,709 views 262 downloads
3 collections
Community Prints Add your picture
Be the first to share a picture of this printed object
0 comments

This is an oak carved sculpture of seated St Peter depicted in full papal regalia including an elaborate tiara. This figure of St Peter originally held two keys. One is now broken, the other is restored. In the Gospel of St Mattew Jesus says to Peter, 'And I will give unto thee the keys of the kingdom of heaven.' In medieval and renaissance art, St Peter often portrayed holding two keys.

Christ selected Peter as 'the rock' ('petra' in Latin) on which he would build the church. Later, Peter became the leader of the twelve apostles and the first pope. 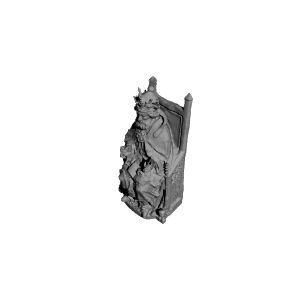