The sculptor launched his work on this image in 1930, with creative a granite bust. Later, the 32 metre monument was carved from geisha pink granite, to be erected in front of the Bolshoi Theatre in Moscow.

The smaller copy of this monument was presented at a New York exhibition, carbed from a block of pink granite. It corresponds to the one exhibited in the MUSEON Arts Park in composition, technique and size.

By the decree of the Moscow City Council of People Representatives of October 24th 1991, the monument was dismantled and placed in the MUSEON Arts Park exposition.
This work is historically and culturally significant, being the momorial construction of the soviet era, on the themes of politics and ideology.

My first attempt at this model failed to print correctly; as the statue's head area is quite small I found that each layer was not given enough time to cool properly before the next was printed, resulting in blobby layers. On my second attempt I set the printer to a cooler print temperature and built a support at the rear which allowed more time for the layers to cool resulting in a successful print. Also, the taller the print the wider the brim I use which I believe helps the print from falling over. 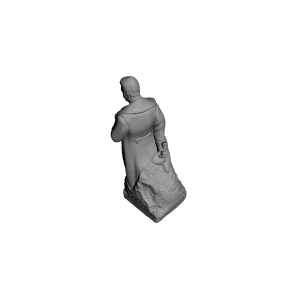 ×
3 collections where you can find Stalin at MUSEON, Moscow by Scan The World
×
Stephen MacLeod
@pemreform
1
Printed on: Prusa i3 Rework
Material: PLA
Posted at: 16th October 2017

My photo of the original, taken in the Muzeon Park of Arts (formerly known in English as Park of the Fallen Heroes) shows the damage caused at the time of its removal. The damage is clearly visible in the model, on Stalin's face and left boot. I printed this without any support and only a skirt, which resulted in a small defect on the right elbow, which is barely visible in normal viewing.