3D
Scan The World
2,901 views 207 downloads
Community Prints Add your picture
Be the first to share a picture of this printed object
0 comments

Shown here standing in the fearlessness gesture (typical of many representations of a Bodhisattva or Buddha, one hand raised with palm faced outward), this Bodhisattva shows all the characteristics of Gandhara art, commonly known as "Greco-Buddhist art"; Gandharan sculptors were inspired by the Hellenistic canon for these early Buddhist representations which can be seen from the loosely fitted, trailing drapes of his traditional dhoti which he wears. His naked torso is covered with jewels; his dress mixes Indian influences, Scythian, Greco-Roman and Iranian. The base is also decorated with a Buddhist scene depicting the adoration of the Bodhisattva. This piece may represent the future Buddha before his renunciation to the world or the bodhisattva Avalokiteshvara.

The sculpture is a bluish-grey, executed in high relief. It originates from the Mekhasanda monastery located on Mount Mahaban. This work reflects the diverse influences that characterise Indian art at the time of the Kushan dynasty whose kingdom stretched from Northern India to Afghanistan. Buddism was widely practiced there and the 2nd and 3rd centuries marked its peak; it was in this time that the first human representation of the Buddha was created as it previously only appeared as symbols.

It is easy model for print, although there are some supports, easy to clean and no risk to brake model while cleaning supports. Enjoy your print. 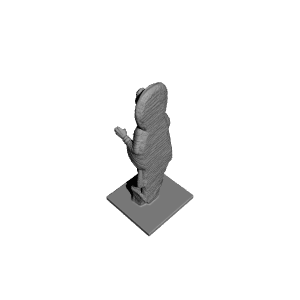 ×
0 collections where you can find Standing Bodhisattva at The Guimet Museum, Paris by Scan The World