A popular feminine deity is a standing figure framed by a large rectangular headdress known as an 'amacalli' or 'house of paper'. This was worn by an impersonator during the harvest festival and similar figures holding maize cobs are thought to represent Chicomecoatl, the goddess of maize and sustenance. The large number of these sculptures that have survived suggest that they were mass produced and may therefore have served as cult images for local temples and even household shrines. As with other Aztec sculptures, these figures have clear Gulf Coat antecedents. 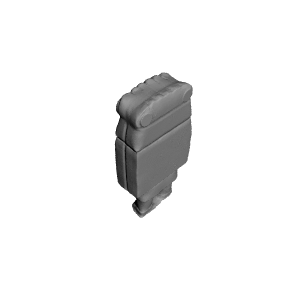 ×
1 collections where you can find Standing figure of Chicomecoatl at The British Museum, London by Scan The World
×
Louise Krasniewicz
@LouiseK
0
Printed on: MakerBot Replicator 2
Material: PLA
Posted at: 26th January 2022