3D
2,220 views 143 downloads
1 collection
Community Prints Add your picture
Be the first to share a picture of this printed object
0 comments

This is something I did years ago on my tablet using Sculpt+ which seems to no longer be around.

There's no real story behind it though one of my co-workers told me about the giant chicken heart from Cosby's Fat Albert cartoon.  Who knows, maybe I was traumatized by it as a child and this is how it's instantiating itself in mid-life :-)

I was able to print this on my CR-10 as-is with no supports though I am using a good printing surface.

I printed at a layer height of 0.12mm, but I have been printing everything at that using CURA.  I think I filled this at 10%.

As-is, the model won't stand.  I heated the legs with a heat gun and adjusted the lean & feet a bit until it was stable.

I broke the leg on the red heart and super glued it back on before I fixed it's posture...

Valentines?  Hide them behind monitors?  The kids seem to like them.

I have been printing these scaled to 50mm.  I don't know if I'd make it smaller for fear of weak legs.

I didn't need supports on my printer.

I am using a LokBuild surface on my printer.  Everything holds tight.  Sometimes too tight...

I tried to print this scaled to 50mm tall on a Ultimaker 2 with clear PLA last night w/o supports.   It did not turn out well.  It did not adhere to the glass plate with a skirt.  I printed another with supports and it came out OK. 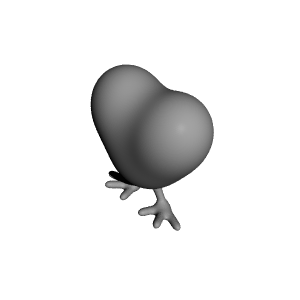 ×
1 collections where you can find Standing Heart by JohnDSutter