Standing Man at the Middelheim Museum

3D
Scan The World
2,618 views 76 downloads
Community Prints Add your picture
Be the first to share a picture of this printed object
0 comments

Standing Man at the Middelheim Museum

Rik Poot (Vilvoorde , March 20, 1924 - Jette , December 16, 2006 ) was a Flemish artist who primarily focusing on bronze sculptures and assemblages in metal.
Poot said; "Without craftsmanship you can not possibly make art. An artist is a craftsman . A sculptor does with his hands. You can still have the most creative mind , but if you can not achieve that, then you're nothing. Have you seen a pianist without fingers or an actor without tongue? It is unfortunate that the art world today unfortunately only runs for publicity and money and some kunstpauzen that make the beautiful weather. An artist must express his emotion , the beauty . That's different than what make silly jokes . Nobody says more that the emperor is naked."Initially clipped leg human and animal figures in "taille direct" in various materials and also works in terracotta. Typically a strong styling with references to Oriental and African cultural products. In 1952 follow orders for monumental sculptures, including the St. Lambertus church mice. As of 1963, he chooses for the lost wax casting only, where it was in on the basis of modeled and joined to each other plates builds up a fragmented composition. His image Naiad in the pond of the castle of the Dukes of Brabant is one example.

Rik Poot seems fascinated by the structure and texture of natural forms. In addition, he expresses the torn and break out in the world as Pablo Gargallo and Ossip Zadkine. Each image is a snapshot and played a strong but stabilized emotion. Leg loves the craft work of sculpting, the act of making; he tries to increase the matter game by making use of patina, and by machining the surface with the chisel. Essential in the formal language of his leg cavities between the bronze parts making his images are composed. By creating these holes get his monumental images at something light and a certain fragility. His works were therefore a powerful and expressive rhythm. Despite the common deformations of the figures, Poots images remain always recognizable. His style was a classic modernism with great compassion that was acceptable to the public.
Bronze is an important theme in his work. The horse on Heroes' Square, which was specially created to celebrate 150 years Vilvoordse fair, is now a symbol of Vilvoorde. It refers to the nickname for the Vilvoorde inhabitants, called the "pjeirefretters". Known works are The abduction of Europa and The Four Horsemen of the Apocalypse (prepared in the center of Bruges, in the garden of the Arentshuis). This group of statues inspired the poet Frederik Lucien De Laere to the poem "The horsemen of the Apocalypse.

Throughout his life he continued solidarity with the people in need. Testifies include his work "Struggle for Labour", an eight-meter-high steel fist, founded in Vilvoorde after the sudden closure of the Renault factories there. Leg immortalized politicians and writers in busts, such as Jean-Luc Dehaene, Leo Tindemans and Marnix Gijsen.Rik Poot was a consummate craftsman who spent his whole life beitelend and modeling in his studio. He complained about the decline of traditional knowledge in contemporary art. He was an opponent of trends like pop art and conceptual art, calling it cheating. He remained his whole life faithful to a style that was rooted in expressionism and cubism in the early 20th century. He admired the anonymous medieval sculptors who participated in the building of a cathedral. 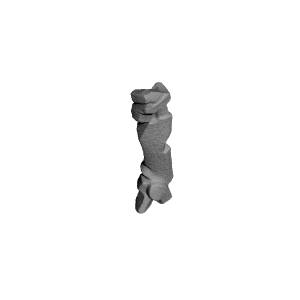