3D
360°
Featured Scan The World
5,035 views 956 downloads
7 collections
Community Prints Add your picture
Be the first to share a picture of this printed object
0 comments

In very few weres are the form principles of Classical sculpture as striking as in the case of the so-called Munich King, which Ludwig I acquired in 1815 in Paris from the Albani Collection. At that time, the statue was viewed as the representation of a mythical hero. The band in his hair was occasionally as the attribute of a sovereign; hence the designation 'King'.

Even at first glance that the figure, a Roman copy of a Greek original, bears witness to the art of the Classical period. The bearded man is standing with his weight on his left leg, with his right leg stepping backwards and to the side. The resulting tilt of his hips is compensated by a counter movement in his upper body. The shifting of weight within the S-curved torso - known as contrapposto, or counter post - and the stepped stance of the figure are guiding themes in Greek Classical art.

On account of his rigid physique, which manifests iteself sui generis i nthe mighty legs and the frontally aligned, stocky torso, the Munich King must date back to around 460 BC. This means that he belongs to what is known as the severe style of the Early Classical Period. The statue probably represented Hephaestus, the god of blacksmiths.

This statue has been uniquely restored, instead of the proposed hammer and block of metal, this version holds a sword in one hand and its sheath in the other. 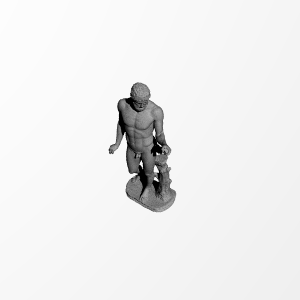 ×
7 collections where you can find Standing Man, the 'Munich King' by SMK - Statens Museum for Kunst