3D
360°
Scan The World
2,544 views 91 downloads
Community Prints Add your picture
Be the first to share a picture of this printed object
0 comments

This is one of a pair of standing nude male figures demonstrating the principles of Contrapposto according to Michelangelo and Phidias, ca. 1911.

Rodin modelled these clay sketches as demonstrations of contrapposto - a fundamental pose in which the body responds when bearing its weight on a single leg. Each figure stands in a manner typical of the works by the famous sculptor after whom it is named. The version after the ancient Phidias captures the calm physical ease characteristic of classical sculpture. The Michelangelo figure, slumped and twisted inward, expresses the psychological intensity resulting in a more contorted Renaissance contrapposto.

The Metropolitan Museum's Rodins sparked the initial enthusiasm of one of the great collectors of the art of the French sculptor. In a spirit of reciprocity, B. Gerald Cantor and his wife, Iris, gave more than thirty sculptures by Rodin to the Museum during the 1980s. The two figures from the collection of Gertrude Vanderbilt Whitney were presented to her by Rodin during a visit to his studio in Paris at the Hôtel Biron in 1911. 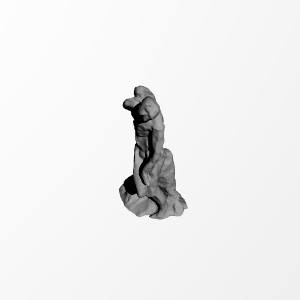