3D
Scan The World
3,975 views 125 downloads
Community Prints Add your picture
Be the first to share a picture of this printed object
0 comments

The devotional cult of Yakushi Nyorai (Medicine Buddha) was one of the first to develop in Japan after Buddhism's introduction to the Japanese archipelago in the mid-sixth century. Concrete evidence of his worship on Japanese soil dates from the late seventh century during the reign of Emperor Tenmu (see below images). Originally venerated solely by ruling sovereigns and court elites for their own personal benefits (to cure life-threatening illnesses), Yakushi would later become the central deity in eighth-century rites to ensure the welfare of the entire realm. By the early ninth century, the deity was also called upon to placate vengeful calamity-causing spirits. During the Heian period (794–1185), Yakushi’s cult spread to all regions of Japan, evidenced by an explosive increase in the production of Yakushi images in the ninth and tenth centuries. Hundreds of extant Heian-era Yakushi statues, an exceedingly high number compared to surviving sculptures of other Buddhist deities, attest to his prominence in those days. Most of these Yakushi icons, says scholar Yui Suzuki, were enshrined in large temples of imperial or aristocratic lineage, but some were installed in private sanctuaries and humble monastic settings far removed from the capital, suggesting that Yakushi worship had already spread to the lower classes. 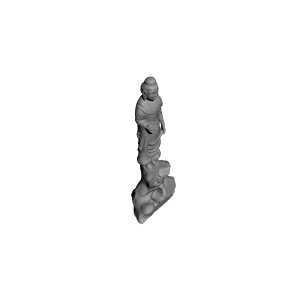 ×
0 collections where you can find Standing Yakushi Nyorai at the Sainsbury Centre for Visual Arts, Norwich by Scan The World