3D
Scan The World
2,222 views 80 downloads
2 collections
Community Prints Add your picture
Be the first to share a picture of this printed object
0 comments

Carved foot with a high shoe, closed by two crossed laces (one at the level of the kick, the other at the ankle) and tied so as to drop the ends on both sides of the foot. These laces are passed by rings attached to the edge of the shoe, clearly visible on the kick. The lace of the ankle is slipped into the mouth of the lion that adorns the upper part. The edge of the shoe is decorated on both sides with a rim forming arches while the tip of the foot presents a relief of a Gorgon's head against a scallop umbrella.

This shoe seems to be a "campagus", rising imperial shoe that encloses the heel and toes while leaving exposed the top of the foot. The sculptor here represented the modeling of the fingers, indicating that this type of shoe was made of a fine and supple leather.

The upper part of the work is probably a more recent addition (16th or 17th centuries?), The marble being slightly more yellow and of a thicker grain. The front part has a lion's muzzle in which the lace passes. The summit features a deeply carved face, or a lion's head, with its mouth wide open. The pupils are marked and the bottom of the head is surrounded by scrolls which, seen upside down, evoke a fleur de lys. The center is dug on 1.5 cm and seems to have received another element, as evidenced by traces of whitish plaster.

The provenance of this work remains unknown, as its original destination, and it is difficult to advance a date concerning the addition of the upper part. This carved foot was donated to the Museum of Antiques by Bernard Lange before 1835, when it appears in the catalog of Alexander Du Mege. Before belonging to Bernard Lange, it seems that it belongs to the collections of the library of Sainte-Geneviève: M. Mongez, Guard of the Antiques and the Cabinet of History of Sainte-Geneviève, indicates it in the article "campagus" of "The Methodical Encyclopedia" (1786), information confirmed by E. Saglio in the article "campagus" of the "Dictionary of Greek and Roman Antiquities" (1887). Finally, a representation of this work is published in 1719 in "Antiquity explained" by Bernard de Montfaucon, it belonged then to the Marquis de Montauban and was already as we know it.
Claudine Jacquet 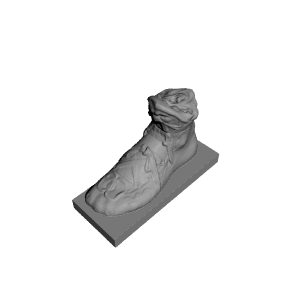