Statue from the temple in El Khereib

3D
Scan The World
1,401 views 38 downloads
Community Prints Add your picture
Be the first to share a picture of this printed object
0 comments

Statue from the temple in El Khereib

It is not surprising that the style and character of both ancient arab architecture and sculpture suggest a complicated synthesis of influences, first from Egypt or Mesopotamia and later from the classical culture of the Mediterranean. In public buildings—predominantly temples dedicated to deities of an Arabian pantheon—there is a long-standing tradition of fine ashlar masonry (of hewn or squared stone) and sculptured ornament. Sculpture is also represented by a striking variety of carved memorial stelae and freestanding votive statues, often carved in alabaster. These are notable for their crude but distinctive style of portraiture or symbolism. In sculptured friezes, some Arabian motifs are recognizable—for instance, the alternation between bucrania (ox heads adorned with ribbons or garlands) and ibex (wild goat) heads. 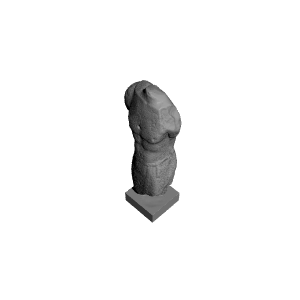