3D
Scan The World
1,395 views 90 downloads
1 collection
Community Prints Add your picture
Be the first to share a picture of this printed object
0 comments

This is one of five unique sculptures found in the royal necropolis of ancient Tamassos on January 31st 1997 during conservation work of the two royal tombs on the site undertaken by the Department of antiques. The sculpture depicts a lion with the tongue hanging out. In some ancient cultures tongue out was used as a greeting and a way of revealing to others that you are good and you do not have a black tongue of a demon. At the other end of the spectrum, throughout many cultures of the world, tongue-sticking is a powerful war gesture and an important and often final move in war dances. 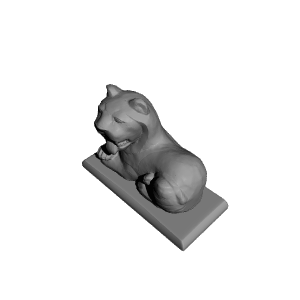