Statue of a nude youth

3D
Scan The World
2,783 views 99 downloads
Community Prints Add your picture
Be the first to share a picture of this printed object
0 comments

Statue of a nude youth

This statue was found in the area of the Olympian Zeus temple, in 1888. The youth would have held some object in his raised right arm. According to one view, the statue renders the "Splachnoptes" by the Cypriot sculptor Styppax, a bronze statue of the 3rd quarter of the 5th century B.C. According to Plinius, that statue depicted a young boy ready to spit-roast the entrails for the sacrifice, simultaneously, blowing to light the fire. 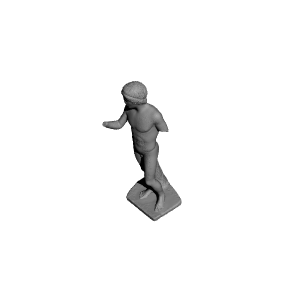