Statue of a Siren

3D
Scan The World
1,921 views 103 downloads
4 collections
Community Prints Add your picture
Be the first to share a picture of this printed object
0 comments

Statue of a Siren

Statue of a Siren made of Pentelic marble and found in the ancient cemetery of the Kerameikos, Athens. The mythical winged woman with the legs and tail of a bird laments the dead man whose tomb she adorned.

The palm of the left hand is all that survives of her arms, which were raised as she pulled her curly, unbound hair. The dramatic nature of her lament is impressed both in the pronounced arc of her sappy torso, the sideways tilt of her head and in the contracted facial features. 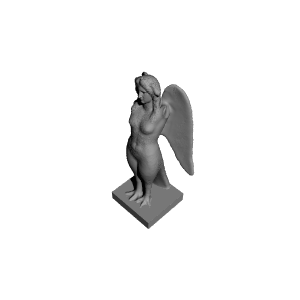