Statue of a Sphinx

3D
Scan The World
2,138 views 82 downloads
1 collection
Community Prints Add your picture
Be the first to share a picture of this printed object
0 comments

Statue of a Sphinx

In Greek tradition, a Sphinx has the head of a human, the haunches of a lion, and sometimes the wings of a bird. It is mythicised as treacherous and merciless. Those who cannot answer its riddle suffer a fate typical in such mythological stories, as they are killed and eaten by this ravenous monster. This deadly version of a sphinx appears in the myth and drama of Oedipus. Unlike the Greek sphinx, which was a woman, the Egyptian sphinx is typically shown as a man (an androsphinx). In addition, the Egyptian sphinx was viewed as benevolent, but having a ferocious strength similar to the malevolent Greek version and both were thought of as guardians often flanking the entrances to temples. 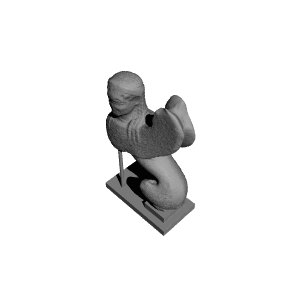