Nymph (Central Figure for 'The Three Graces') at the Jardin des Tuileries, Paris

3D
Scan The World
7,621 views 830 downloads
2 collections
Community Prints Add your picture
Be the first to share a picture of this printed object
0 comments

Nymph (Central Figure for 'The Three Graces') at the Jardin des Tuileries, Paris

Nymph (Central Figure for 'The Three Graces') is a bronze sculpture by Aristide Maillol. It was modeled in 1930 and cast in 1953. In the tradition of the Three Graces in Ancient Roman sculpture, and the sculpture of the same name by Antonio Canova (also on Scan the World) it shows serenity, in contrast to his contemporary August Rodin.

Aristide Joseph Bonaventure Maillol was a French sculptor, painter, and printmaker. he subject of nearly all of Maillol's mature work is the female body, treated with a classical emphasis on stable forms. The figurative style of his large bronzes is perceived as an important precursor to the greater simplifications of Henry Moore, and his serene classicism set a standard for European (and American) figure sculpture until the end of World War II.

Josep Pla said of Maillol, "These archaic ideas, Greek, were the great novelty Maillol brought into the tendency of modern sculpture. What you need to love from the ancients is not the antiquity, it is the sense of permanent, renewed novelty, that is due to the nature and reason." 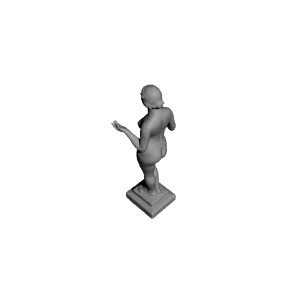 ×
2 collections where you can find Nymph (Central Figure for 'The Three Graces') at the Jardin des Tuileries, Paris by Scan The World