Venus with a Necklace at the Jardin des Tuileries, Paris, France

3D
Scan The World
4,373 views 398 downloads
Community Prints Add your picture
Be the first to share a picture of this printed object
0 comments

Venus with a Necklace at the Jardin des Tuileries, Paris, France

According to the artist, this sculpture was developed from another life-size nude entitled 'Summer' (also on Scan the World), made in 1910. The model for this 'Venus', however, was a Spanish maid who came to work for Maillol at the end of the First World War. Maillol later recalled that he worked on the piece over a period of several years. A plaster version, complete with necklace, was exhibited in Paris in 1928 and a bronze cast was sold the same year. Named after the goddess of love, this sculpture epitomises Maillol's vision of feminine beauty.

Aristide Joseph Bonaventure Maillol was a French sculptor, painter, designer and illustrator. He began his career as a painter and tapestry designer, but after c. 1900 devoted himself to three-dimensional work, becoming one of the most important sculptors of the 20th century. 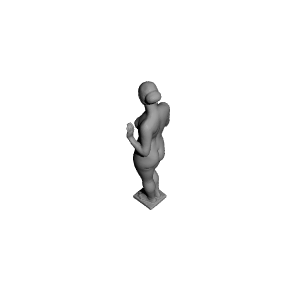 ×
0 collections where you can find Venus with a Necklace at the Jardin des Tuileries, Paris, France by Scan The World