3D
360°
Featured Scan The World
2,610 views 239 downloads
2 collections
Community Prints Add your picture
Be the first to share a picture of this printed object
0 comments

Standing in a classical contrapposto, this athletic, nude young man raises his arm to crown himself with a laurel wreath. The work is one of many Roman copies of a Greek original (ca. 430 BC) thought to be a late work by Polykleitos of Argos.

The work, created in the 1st Century AD, takes its name from its owner Richard Westmacott. In 1857 The Westmacott Athlete (or Ephebe) was acquired by The British Museum from which numerous plaster copies were made. This copy originates from the National Archaeological Museum in Greece, a lesser well preserved version of the Westmacott version which had been restored. 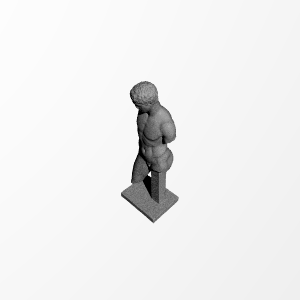