This plaster copy was acquired in 1897, cast after a Roman copy of a lost Greek original Hellenistic style dating from the 3rd Century BC, found in The Villa of the Antonines (home to Antoninus Pius, Marcus Aurelius, Lucius Verus and Commodus) outside Rome. The scroll in his right hand is an 18th Century restoration.

Menippos of Jordan was born a slave, but he bought himself free and trained as a philosopher and critic. Menippos invented a special genre that directly focused the attention of the audience, the satirical cynic's twist of institutions, conventions and the ideas of the time that we know so well today from, for example, stand up comedy and satire on television. 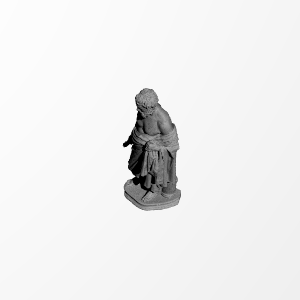