3D
Scan The World
2,280 views 56 downloads
Community Prints Add your picture
Be the first to share a picture of this printed object
0 comments

This stone statue dating from the 19th Century originates from Sumba, a small island in Eastern Indonesia. From the details on the chest it can be identified that the statue depicts the founder of a clan or a village, otherwise known as a Marangga. The ornate details on the chest is a symbol of wealth, which is used to mean to transmit inheritances in the family treasure of the tribe. 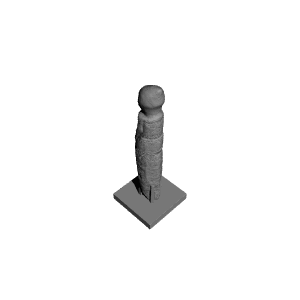 ×
0 collections where you can find Statue of Ancestors at Quai Branly, Paris by Quai Branly